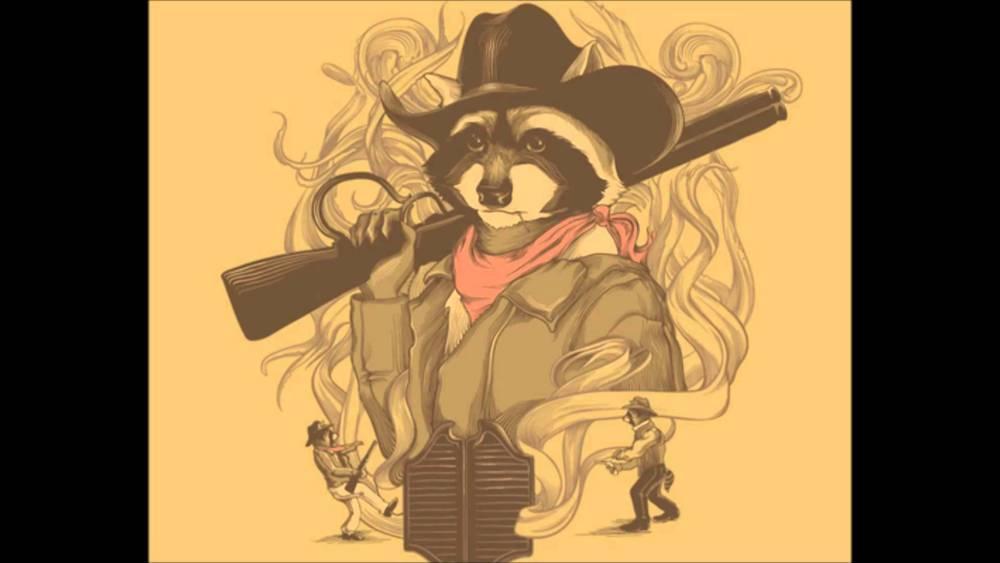 Another 100, another buckle. Always a challenge and always a blessing. I’m not sure I’ve ever wanted a race to end more than this one. The race itself was well organized, terrific vibe and the weather was perfect. What made this race uncomfortable wasn’t the mud, there was a lot. It wasn’t the 4 “loops”. I’ve done a 100 with 5 loops. It wasn’t the fact that I was undertrained for the event with my longest run being 6 hours and 29.5 miles just over 2 weeks before. It was this stinking 4.2 mile out and back stretch on the far end of the loop that literally felt like 5 miles the 2nd time, 8 miles the 3rd time and never truly ended the last go around. It was Groundhog Day after all, and, having just finished The Dark Tower series, it felt as if “time is funny ‘round here.”

Pacing my friend Jon, an emergency medicine physician in New Orleans and former 2:40s marathoner to his 1st 100 miler was a joy. My goal this year is the Leadville trail 100 in August, so this race was all about Jon and getting us to a successful finish. 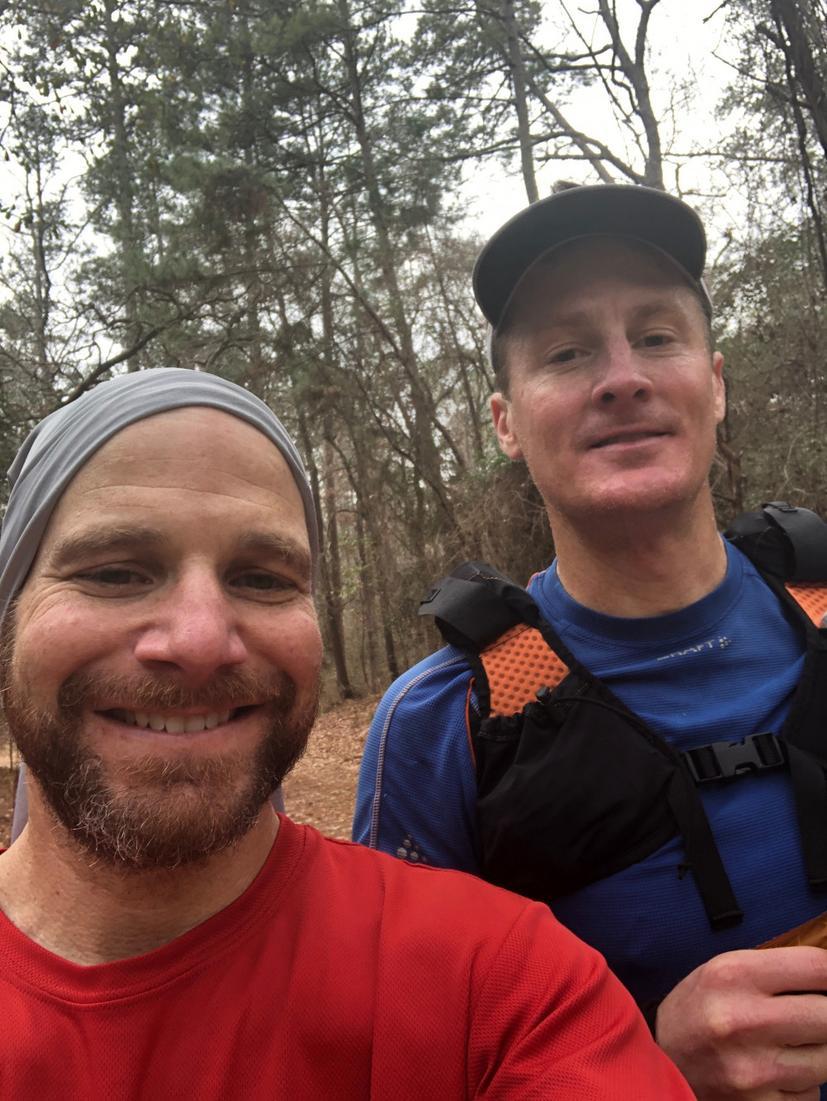 The loops weren’t really loops, but a series of out and backs. The terrain, if not for about 8 sections of mud that you hit on the out, and back, was hilly and great

trail. Some rocks, some roots, some fire road, some pine needle covered trail, some wooden bridges and almost never anything flat. All of the hills were runable if you wanted to run this faster, but that wasn’t our plan. We were to walk every hill after walking the 1st mile and we slow jogged the flats and downs. We started in the dark with sun up about an hour in. The weather was near perfect for running with wonderful overcast skies and temps rising to the 60s. Other than the mud, the conditions were great. The 2nd aid station was at the end of a 1.5 rolling uphill fire road to the end of the park. They had bacon. And bacon makes everything better.

3.5 miles later we hit the 3rd of the aid stations called damnation. From here you run 4.2 miles of rolling, muddy single track down to a turnaround that had fluids and 2 guys taking your number to make sure there are no course cutters. You turn around and do it all over again. On the first of the 4.2 miles out and back, we were running amongst what I refer to as “the talkers.”  The talkers are those runners more interested in talking and complaining and pseudo cheering others on to the point of downright annoyance! The “talkers” are typically those runners who start out faster than they should (at a 22-24 hour pace finish) and fade quickly with hopes of finishing in under 30 hours. They don’t talk so much later on ;).

The goal was to hit the 25 mile point at the start/finish area by around 6 hours. While we were a little “quick” at just over 5:40, we had gone very easy and didn’t feel as though we worked too hard to get there. Early in the day, my mantra was to make this day about the 3rd loop. With loop like courses, the 3rd can be the most mentally challenging and I wanted to break the day down into this: loop one - work easy and finish as though you haven’t really run yet. Loop two - work through loop two so that you can nail loop 3. Loop three - make it your b!t#*. Loop 4. Just git r dun. Let us see how things played out, shall we?

Loop 2, miles 25-50. Compartmentalizing races into 4 parts is actually great. Mentally, it makes things much easier to process. However, after 30 miles, it’s a long friekin way, no matter how you look at it. Leg fatigue started to kick in around 30 and I always like to hold off on Advil #1 as long as possible. I caved at mile 39 which was on the return path to Damnation, though i still didn’t realize I hated this stretch so much.  Jon and I were sticking to the plan of walking the ups and jogging the downs and flats. On loop 1, the jogging pace felt super easy. Because it was. On loop 2 however, by the last 10 miles, it wasn’t so easy anymore. At mile 45, while still daylight, I kicked a root/stump in the middle of a trail so hard with my left foot, I almost felt my left hip pop out of socket. That stayed with me for the rest of the day. The last 5 miles to the start/finish was in the waning hours of daylight, and we chatted it up with a few people whom we liked this time. They were not “talkers.” We also saw the eventual men’s winner a few times on this loop. We saw him at the beginning and end of the 3rd loop while on our 2nd and I think he was something around 29 miles ahead of us by then. Absurd! In fact, though not to his level, there were many fast runners out there, men and women. With the loops and out and backs you keep seeing the same folks time and again so you actually get a sense of where people are at, unlike with single loop, point to point or out and back only races. We finished loop 2 in 5:52, but had to work harder for it. However, at this point, we were on to loop 3!

With a shoe change from my Topo Terraventure (they finally died after almost 600 miles of rough running) to my newer Topo ultraventure, we set out for miles 50-75. And, sadly, I don’t believe we made loop 3 our b!t#*.  We ran about 30-40 minutes as the sun set and then turned on the lamps once again. At the Gate turnaround (mile 56) I would say it was a mistake to have the 2nd piece of bacon. Therefore, it was flat out dumb to have the 3rd piece! 2 miles later Jon was relieving the contents of his stomach back into the forest where they would remain until the next rainfall. If he’s had one Achilles heel with the ultra racing, it’s been the GI distress he seems to have with every race over 50 miles. I was happy that it took longer than usual for him to get there, but also a little concerned for his well being at this point. Emesis x 2 occurred before Damnation and as I alluded to earlier, that out and back started getting longer and longer. However, Jon rallied mightily on the back section and we actually started to jog a few of the ups. Nothing with steepness, but enough to create variability in the muscles we were using. My gut remained ironclad despite the 3rd bacon slice and was able to continue to eat and drink throughout. Miles 70-75 were a bit more challenging for Jon as we had to walk a few of the downs, which I am loathe to do.  I always feel like it’s just giving away free time. Though I wasn’t too concerned with finishing times here, I was concerned with getting done early enough so as to get a nap before having to check out of the Huntsville, Tx Super 8 by Wyndham (which makes it sound more than the flea bag motel it was).  Loop 3 was completed in 6 hours, spot on.

The final loop was tough! Every 100 miler I’ve done has been tough. In each, you reach depths of hurt that must be overcome. You have moments of doubt that crop up and you always have to deal with something you haven’t experienced before. These are hard events, period. The good news is that Jon’s GI system stayed good the rest of the way. I actually enjoyed running in the dark better because the headlamps and waist lamps pick up the rocks, roots and stumps better. The other good news is that the aid stations (starting midway through loop 3) started serving broth, ramen, mashed potatoes, cheeseburgers and grilled cheese (hot food!) which was better than the pbj they stuck with during the daylight hours. I even had some pancakes! But by this point, fatigue was setting in. I took a caffeine tab at mile 78ish which was all I needed. Jon got one at mile 65 and 80. His fatigue was greater owing to the fact that he had never gone this long before. Not that I wasn’t fatigued, because I was. When we did jog, what felt like a 12 minute pace was actually more like a 15 minute pace or greater, and the effort it took to run was growing exponentially. The ache in the legs wasn’t really much different from mile 30, but the effort was dramatically different. Dramatically harder. At mile 80 I felt the blisters under my big toes for the 1st time as the mud finally took its toll. For 10 minutes every step was torture trying to prevent rolling up onto the fluid filled pain bags under my funky big toes. After those 10 minutes I decided the best course was to grin and bear it, run normal and pray they pop. They did and thank goodness for small favors. The best thing that happened to me all day(s) ironically was on the never ending out and back to damnation. Jon and I were suffering in our own ways. When I suffer I just want to run and get things over with. When others suffer, running becomes secondary. We became separated for most of that back. While by myself I kept waiting for landmarks I had remembered to appear, yet they never did. I remember trying to will them into reality. Maybe I was sleep walking, or maybe just looking right when I should have looked left. But when almost ready to reach the bottom of my emotional tank, I saw the little wooden footbridge which I knew to be just a few 100 yards from damnation. While it did take forever, that little bit of “well, you made it” went a long way. Jon was only a minute back by this point and we were officially in the home stretch.

As the sun rose for the 2nd time during our race it was a nice time to reflect on what we were doing. Feel gratitude in that we could do this, and continue to laugh and tell stories and keep ourselves in the moment. With a few miles left I told Jon that 25something would be a LOT better than 26anything and that we were going to be close. As much as it hurt, we ran most of that last mile and finished together in 25 hours, 54 minutes.

Last year when we raced the Bandera 100k together, we went to San Antonio the next day. When we should have napped, we went to another bar. I was in bed from about 4 pm until 7 the next morning. Being another year wiser, we napped at the lovely Huntsville super 8 by Wyndham for a few hours after cleaning up. We drove to Houston, had a celebratory lunch and Bloody Marys and then napped again before watching the Patriots win their 6th super bowl in the hotel bar. As always, an experience to remember.