A Podiatrist's Journey through his first half Ironman 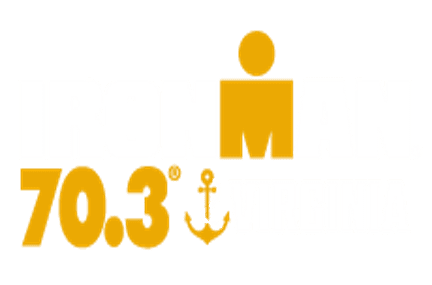 As a long time runner, with an extensive injury history, it was only a matter of time before Dr. Feldman convinced me to give triathlons a shot. Add in some fraternal competition from my older brother in Seattle and we were off. (This will be a blog about the race itself. There will be a second part in the future about this runner’s experience transitioning to multisport events to stay healthy and improve my running.) The race my brother and I decided would work was a half Ironman distance at the Williamsburg 70.3. For the uninitiated, that’s a 1.2 mile swim, 56 mile bike ride and 13.1 mile run. We also managed to rope 2 long time friends from Saint John’s into the shenanigans. Add in one of those friends’ co-workers and the team was assembled.

The training went very well. I relied heavily on the experience of Dr. Feldman, a sub 10 hr Ironman finisher now turned ultramarathoner, and Mike Robert DPT, a life long runner and multisport athlete with solid credentials who has put me in the hurtbox multiple times. They built a training plan that got me fit and also kept me healthy. Everything built gradually with some key workouts that served as important building blocks and experiments. I was explicitly limited in how much I was allowed to run given my injury history. This proved very wise. There were enough bike workouts to get my fitness to peak, enough runs to keep me from going crazy and enough swims to make me stink like chlorine.

The drive to Williamsburg was broken into 2 days of travel to not end up with stale legs. We rented an apartment about 10 mins away from the athlete village which was great. Final prep the day before the race was just a quick dabble in each of the disciplines to make sure everything was working well. Goggles suctioned well, bike shifted smoothly and braked fine with a borrowed front wheel from Mike Roberts, Neil’s aero helmet fit well, racing flats stayed on my feet. We dropped the bikes off in the transition Saturday night for our race Sunday AM and went out for a pre-race meal. Most of us settled on something light but balanced with fish being the predominant selection for the crew. This was followed by a Yeungling later that night to calm any pre-race nerves while setting up the remaining gear for the next day. 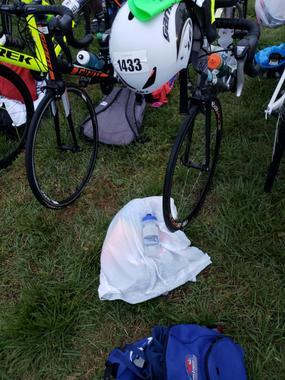 (Another journey for the CMP water bottle)

RACE DAY! We were at the transition zone by about 5:20 for a 6:50 start. The weather forecast was very dodgey leading right up until it started. There were serious concerns about a portion of the event being cancelled but ultimately it just rained the whole time with no alterations needed for the event other than everyone trying to keep their gear dry. PBJ was the breakfast of choice for me. While I’m normally a coffee drinker, I had not been having any before AM workouts so wisely chose to abstain rather than refund it on the swim. Nutrition while competing has never been something I have done before this race so there was lots of experimentation prior to race day. I settled on 2 bottles of water with 2 scoops each of a product called Tailwind for calorie and electrolyte refueling, 3 GUs taped to the frame of the bike and a package of clifblox that I would pick up in transition.

I threw on the wet suit up to my waist then the guys all walked to the swim start about 1/3rd of a mile down a dirt path. This was followed by some puttering around as we lined up for the swim start based on expected swim time finish. As a first timer, this was great for me as a mass start is, in a word, terrifying. As the announcer was doing some last minute intros, I went to zip up my suit. These typically zip from the back. Perhaps it was because I had only worn it once before, or that it was early in the morning, or that I was nervous, or that I normally drink coffee...whatever the cause, my wetsuit was on backwards. I flopped to the ground, had my buddy Tim yank it off at the ankles. Quick spin and I was back in business. All nerves cleared up at that point.

The swim was better than expected. A jump off of a dock and we were on our way. It’s weird the first time someone touches your ankle or you touch/punch someone else, but none of it is malicious hopefully. I only had one person roll over my back. My goggles maintained a good seal which had me concerned in the days leading up to the race since I wear contacts to compete but swim blind-ish in the pool for training. I use a cadence device when swimming to help keep me under control. I will confess that the beeping is very helpful for keeping you honest if you are overdoing it or doggin’ it. I ended up top ⅓ in my age group for the swim.

Transition one came and went. They had wet suit strippers that helped yank the suit off. Got on the bike and settled in for the next 2 ½-3 hours. I have a rather old, entry level road bike that was my trusty steed. While I do enjoy this bike and what it has done to allow access to the sport, I hate getting passed by people who are on better equipment than me. I particularly hate the  “woooooosh” sound from all of the aerodynamic components as I got left in their dust. The name of the game for me on the bike was to stay under control, which I did. Looking back, I may have saved a bit more than I needed. However I also didn’t want to die on the run. Again, top ⅓ in my age group for the bike. 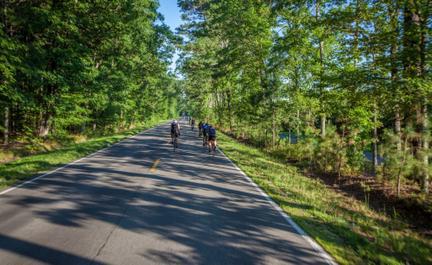 Transition two was upon me as we re-entered the now sloppy wet field. The run out to the road felt like a cross country course with about 2 inches of standing water. The run course was 2 loops of an out and back and I was feeling ready to go after my 2.5+ hour warm up on the bike. I don’t like courses designed like that for a few reasons though. The first is that the second lap gets very crowded as more people get to the run course. The second is that I’m admittedly not very tough mentally. The outbound trip the second time felt like the 3rd lap in a mile. There are combined feelings of bodily fatigue, mental fatigue and almost something like regret or self pity. I’ve never been good at finding the pain cave. Add on the fact that my shoes were soaked the second I stepped off the bike and I was having a full on pity party inside my head while my blisters were screaming in my shoes. I managed to hold it together and ended up with the 7th fastest run overall. Turns out I was fine with minimal run training just like they said I would be. I got a kiss from my wife, a medal and a hat as my rewards. 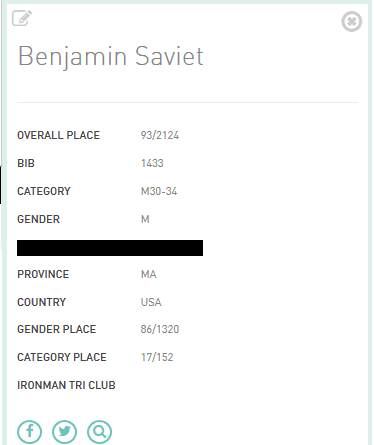 Other than raging blisters and a general feeling of malaise it was an awesome experience. As I write this, a little over 2 weeks since the race, I finally feel like my body has recovered. Other than trying to empty the metaphorical tank, the race, on some level, felt a little like a celebration of the new and different training I did leading up to it. The nutrition aspect was fun to experiment with and learn how to handle. It’s a very different style of racing than I have ever done but the experience itself was excellent and great to share with friends and family. See you all out there at the next one!